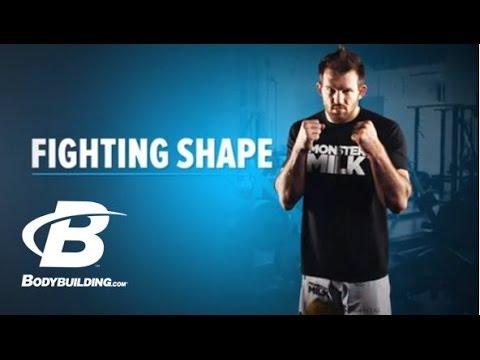 Training and preparation are often the difference between earning an octagon win and gasping for air on the mat. A real-deal MMA fighter doesn’t just waltz into his gym and start punching bags without purpose or direction. He prepares for each bout by training with precision and intensity.

UFC light heavyweight Ryan “Darth” Bader is a skilled fighter. He’s also a strong, well-conditioned athlete. Put the two together and you have a guy who trains hard, hits harder, and wins bouts. His win on the Ultimate Fighter Season Eight and his 19-4 record are proof enough, but Bodybuilding.com can do you one better. We can show you how he trains.

You may not be interested in testing yourself in the octagon—hell, we’re with you—but you can still learn something about fitness from Ryan Bader and his coach Aaron Simpson. After all, it’s their job to win fights.

Here’s a dynamic warm-up, workout, and even a diet from Bader’s fight camp.

THE WARM-UP
Ryan divides his warm-up into three parts. He does dynamic stretching first, then an agility ladder, and finally a circuit. When he’s getting ready for a fight, he’ll actually use the warm-up as a standalone conditioning workout.

This warm-up was created to prepare your body for intense training. You’ll be warm and ready to roll by the end. It will also prepare the central nervous system. As Bader puts it, “It doesn’t matter if you’re a professional MMA fighter, a bodybuilder, or just someone who’s trying to get in shape. A good, hard, dynamic warm-up will help your flexibility and help your strength.”