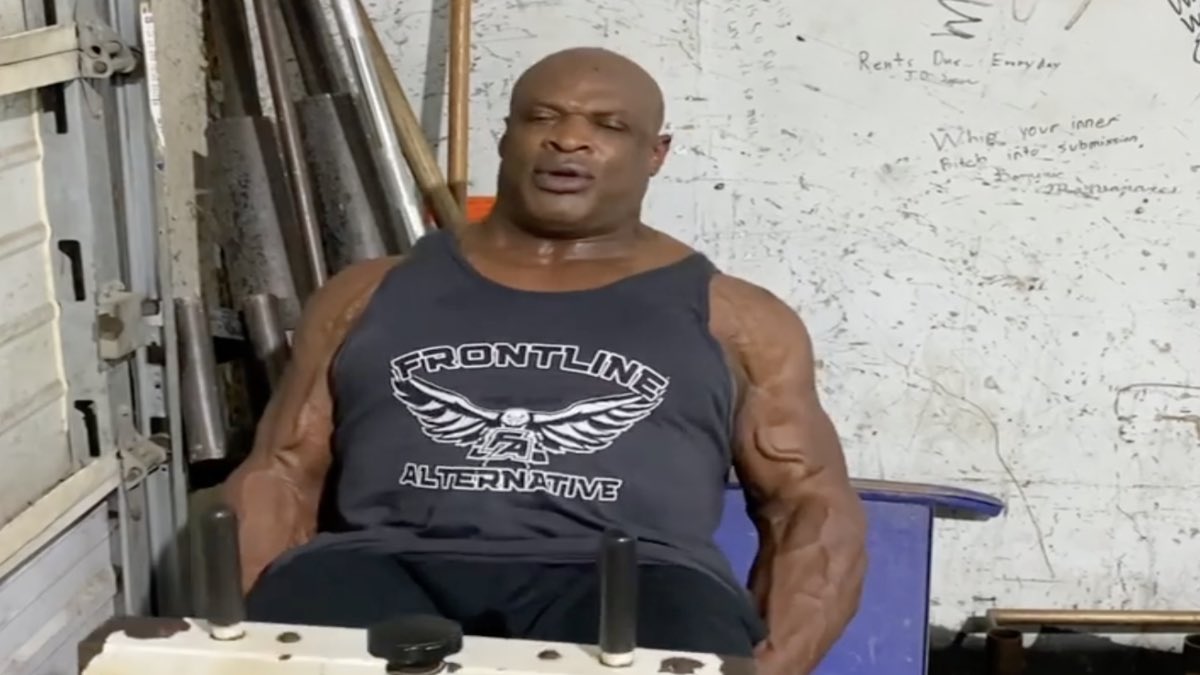 Many consider Ronnie Coleman to be one of the greatest bodybuilders of all time.

Unfortunately, the 58-year-old Coleman has fallen on hard times of late. The legendary strength sports athlete has undergone over a dozen surgeries on his neck and back. While his balance and leg strength have been improving, he walks with crutches for the time being. These developments certainly haven’t stopped Coleman from keeping an optimistic outlook and pushing himself wherever he can.

For example, on June 12, 2022, Coleman shared footage of a recent training session where he did some calf raises (weight undisclosed) for reps.

If his social media is any indication, Coleman’s calf-raise session appears to be about sharing regular updates on his progress. Coleman has been posting videos of himself training his legs in recent weeks. Per the caption of his Instagram post, it seems to be an apparent part of keeping himself as active and healthy as possible.

“Trying my very best to do calf raises with both of my feet being totally numb,” Coleman wrote. “Sometimes it’s not about how hard you try to do something, it’s about how bad you wanna do something.”

According to Coleman, he doesn’t let his mobility troubles keep him away from the gym. If anything, they seem to motivate him more based on his approach.

“I may have a little trouble with my mobility, but I still train legs twice a week every week,” Coleman wrote in another recent post on Instagram. “I miss doing squats more than any exercises I’ve ever done. But at least I still have some leg strength left.”

With one of the more decorated resumes in bodybuilding, some might consider Coleman an ambassador of the sport.

From 1998 to 2005, Coleman captured eight straight Mr. Olympias — tying Lee Haney for the most-ever Olympia wins. Throughout his 17-year career (1990-2007), he won 26 International Federation Bodybuilding and Fitness (IFBB) competitions. Thanks to a rare combination of strength, conditioning, and heavy, challenging lifts, some might even consider Coleman the strongest bodybuilder ever.

His place in the pantheon of elite bodybuilders and his positive approach to life naturally have the greater bodybuilding sphere closely monitoring his recovery. The comments on Coleman’s social media posts often find a litany of stars like Breon Ansley and Phil Heath offering appropriate words of encouragement.

Last fall, in recognition of his many achievements, Coleman received the 2021 Arnold Classic Lifetime Achievement Award from fellow Mr. Olympia legend Arnold Schwarzenegger. The two men possess a combined 15 Mr. Olympia titles and have maintained relative contact over the years.

Coleman has expressed hopes he’ll be able to walk unassisted again in the near future. If he keeps pushing himself appropriately in the gym while holding a cheerful mindset, it might only be a matter of time before the bodybuilding legend can accomplish his goal.